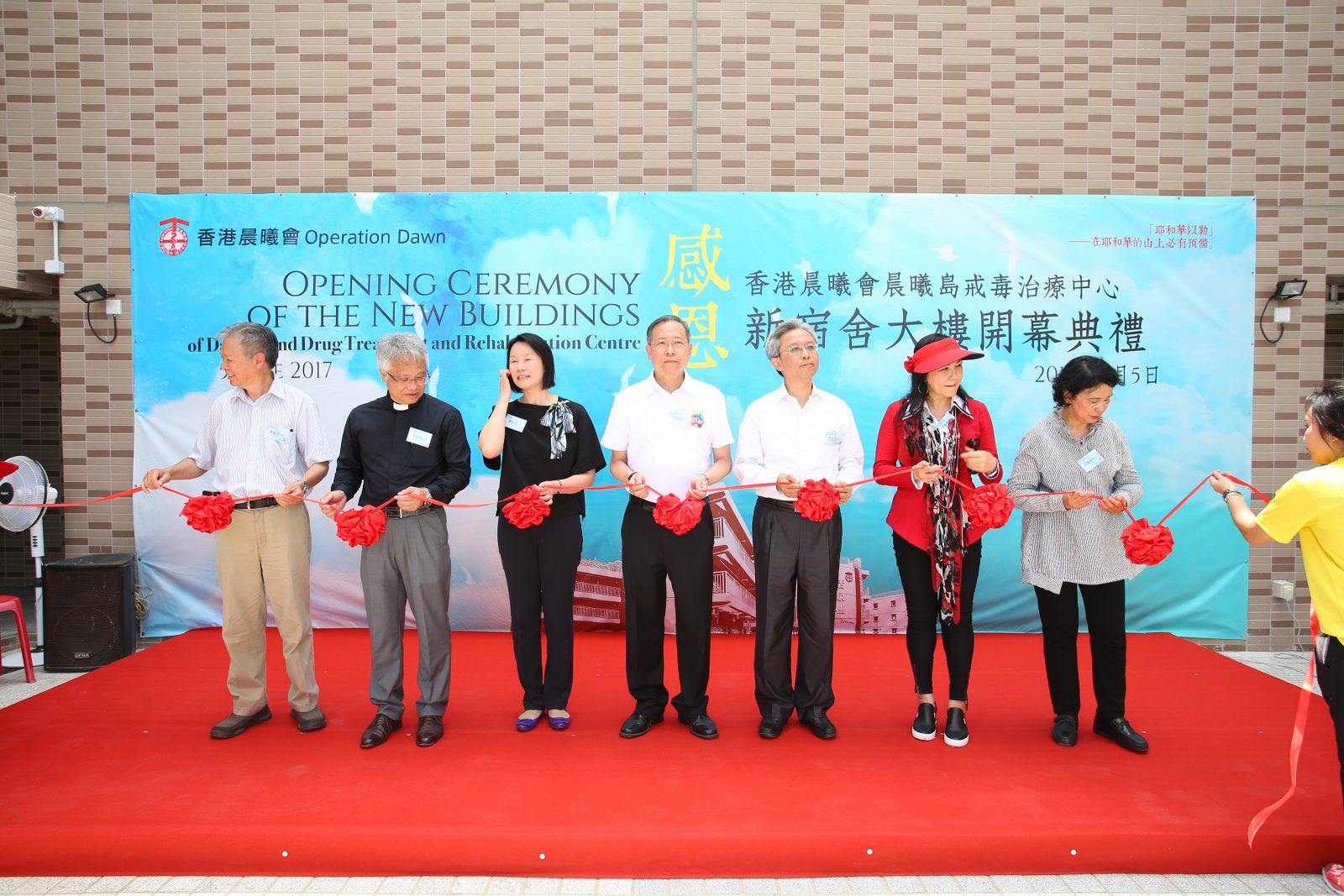 Introduction: Ever since the Gospel Drug Treatment and Rehabilitation Centre of Operation Dawn was moved to Dawn Island (used to be called Town Island, 伙頭墳洲 [ Fo Tau Fan Chau]) in 1976, we had been using steel shacks as residential houses, classrooms, and function rooms. Water supply and electricity facilities were rather basic: our drinking water must be shipped in from outside and we needed to collect rain water for our daily use by a small reservoir; our diesel generator could only provide intermittent electricity in a certain period of time every day.

In 2002, the Government made it a statutory requirement that any organization must apply to Social Welfare Department for a license to operate any drug treatment and rehabilitation centre. The physical settings, hygiene and safety standards, etc. of our accommodation and facilities must be upgraded and enhanced in order to comply with the requirements of the licensing scheme before we were eligible to get a license. The reconstruction of Dawn Island was something we could not do without, so we commenced the grand project in the following year.

Timeline of the Reconstruction of Dawn Island

2003 |&nbspIn July, a group of fervent Christian professionals gathered at Operation Dawn and formed the Reconstruction Project Committee, voluntary in nature. They designed building plans and assisted our negotiations with various departments of the Government. Mrs. Lilian Yeh (not yet taken up the post of General Secretary until 2005) joined the Committee and worked extensively on local and overseas fundraising for the project, organizing flag selling, music concerts and dinners.

2004 |&nbspEarly this year, Guymo Wong of Ronald Lu and Partners voluntarily took up the design of reconstruction plan of Dawn Island. To proceed faster at this stage, it was decided that we would build village houses for residential use, because the building plans of such were exempt from the inspection of Buildings Department.

2006 |&nbspWe were planning on building 4 village houses, and the budget of building cost was $8 million. It was the policy of Narcotics Division to disburse a grant of maximum $3 million for each reconstruction project, so we were able to apply for 3 grants, adding up to at most $9 million in total, for our 3 centers (namely Dawn Island Gospel Drug Treatment and Rehabilitation Centre, Wong Tai Sin Halfway House, and Girl Centre). Meanwhile, since the renovation and moving of our Girl Centre in Yuen Long used up $1 million of the grant, and no immediate rebuilding of our Wong Tai Sin Halfway House was needed at the moment, after discussion and mutual agreement, we gained the permission from Narcotics Division to make full use of the remaining grants on the reconstruction project on Dawn Island.

2008 |&nbspBeat Drugs Fund approved of a grant of $6 million for our Dawn Island Reconstruction Project. The vacancy left by the resignation of our voluntary architect this year was filled by Wilton Wong (of Wilton Wong Architects Limited), whom we hired in January. By the end of this year, CLP Group discussed with us the feasibility of electricity supply on Dawn Island.

2009 |&nbspSteven Lam of TLS & Associates Ltd. won the bid in our public tender and became our Quantity Surveyor (Q.S.).

2010-2012 |&nbspThe Government injected $3 billion into Beat Drugs Fund in 2010, allowing each drug treatment organization to apply for a financial aid of $50 million at most. In March, Beat Drugs Fund approved a grant of $37.88 million for our Reconstruction Project, with the condition that we needed to raise our own fund of no less that 20% of the grant, meaning $8 million. We issued an open tender for the construction work on the Island. Later, to fulfill the facility requirement of power connection in our collaboration with CLP, we had to build two extra village houses to serve as generator rooms, so we needed to redraft the building plans. However, when we received the bids and discovered that the lowest bid had to be $80 million the minimum, we could but revise the plans and our choice of materials in order to cut cost. The updated tender was sent to Architectural Services Department for inspection.

2013-2014 |&nbspBecause of the revisions made to the building plans, we advertized an open tender for a second time, and Tapbo Construction Company Limited won the bid. By the end of 2014, Sai Kung District Lands Office issued us the “Consent to the Commencement of Building Works”, which meant we could finally proceed with the construction works on Dawn Island.

2015 |&nbspOur Ground-breaking Ceremony was held on 22 January. On 30 April, we were informed by Narcotics Division that the grant they offered to us was now raised to $50 million, the top limit.

2016 |&nbspAll construction works on Dawn Island came to completion on 24 February. We immediately sent our license application to Fire Services Department, and apply to Social Welfare Department for the operation license right away.

2017 |&nbspOn 16 May, Social Welfare Department officially issued us a permanent license to operate Dawn Island Gospel Drug Treatment and Rehabilitation Centre. All students on the Island moved in to the new residential buildings (namely, Carmel House and Living Spring House) on the same day. We held the Opening Ceremony of the New Buildings on 5 June, and the guests gracing our ribbon-cutting ceremony included Mr. Lai Tung-kwok, the then Secretary for Security, and Mr. Joshua Law Chi-kong, the then Permanent Secretary for Security, Ms. Manda Chan Wing-man, the Commissioner for Narcotics.